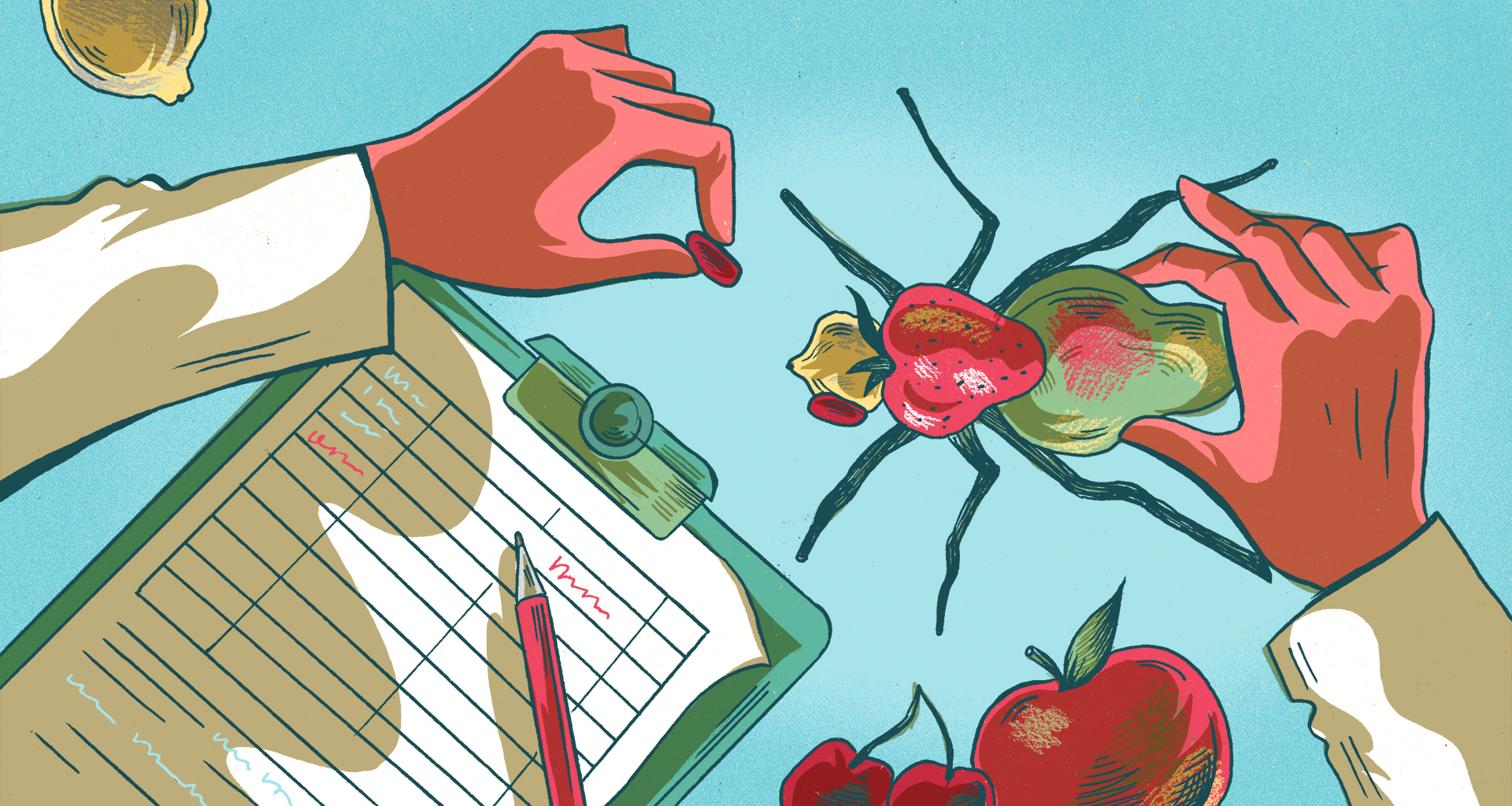 All hail the fruit fly

Do the clouds of tiny fruit flies that infest your kitchen annoy you? Think again. Not only are they the perfect guinea pigs for scientists, they’re also more like you than you might think.
By Christien Boomsma & Simone Harmsen / Illustration by Kalle Wolters / Translation by Sarah van Steenderen

Jean-Christophe Billeter is in love. His beloved is beautiful, smart, extremely social, and even responsible for some major scientific breakthroughs. The object of his affection? Drosophila melanogaster, aka the fruit fly.

While most people hate the tiny insects that come seemingly out of nowhere to infest your bananas and apples, behavioural biologist Billeter has dedicated twenty years of his life to the fly that he not only thinks is cool, ‘I know they’re cool.’

How does he know this? Well, fundamental things such as the fact that genes are located on chromosomes were first discovered in fruit flies. ‘They have chromosomes that are so big that they are almost visible to the naked eye!’ The same goes for the discovery that nuclear radiation can cause mutations. ‘A huge amount of what we know about the mechanisms of life has actually been discovered in this organism.’

His eyes shine when he speaks of the tiny pests. To him, they’re beautiful and fascinating creatures that can help him answer one of the most fundamental questions in biology: how do genes influence behaviour?

One might think that fruit flies are far too different from humans to be useful for this kind of research, but nothing could be further from the truth. Although humans and fruit flies had their last common ancestor around 600 million years ago, we still share ‘fifty per cent of their genes’. ‘And 75 per cent of the genes that cause diseases in humans have a comparable one in the fruit fly’, according to Billeter. When Homo sapiens left Africa and started to farm, using yeast to brew beer and bake bread, Drosophila melanogaster – which feeds on yeast – tagged along and invaded the rest of the world.

They can learn things, although I have to admit, they are not very smart

It follows then, that these insects are perfect for genetic research. Their whole genome has been unravelled and every gene can be genetically altered. A researcher can obtain every conceivable mutant for only 30 euros a week and start testing fruit flies with ADHD, Parkinson’s, or other diseases. Billeter alone has 1,200 different ‘mutants’ in his lab, on a shelf no more than 50 centimetres wide.

And their behaviour? Well…. Don’t get Billeter started! ‘They can learn things, although I have to admit, they are not very smart. They only have 100,000 neurons in their brain, while we have a million times more. But they do have a full social life. For instance, the females form groups and lay their eggs together.’

One egg – carefully laid on your overripe plum – will not survive, because moulds that also develop on the fruit will kill it. However, when several females work together, it’s the mould that suffers defeat.

‘The way they do this is also quite interesting’, says Billeter. ‘They have “calling pheromones” that attract other flies from a distance and guide them onto the fruit.’

An interesting, if disgusting fact: these pheromones are made by male fruit flies and injected into the females with their sperm. When the female gets to your plum, she actually ejects the smelly sperm to call her sisters. That means your fruit is covered in fly sperm.

This is what truly fascinates Billeter, however. Because this sperm ejection has a double function. The pheromone that the males put into the female makes her smell ‘manly’ to other fruit flies, making them less attractive. A good thing for the male that last had sex with them, because he has a bigger chance of producing offspring. Unfortunately, it’s bad news for those females looking for the best mate they can get.

‘It leads to a battle of the sexes’, says Billeter. ‘An arms race, like the Cold War. The males come up with strategies to keep the female from mating again. And the females counter these, after which the males find an even more refined way to manipulate them. They are continually in conflict to control their own reproduction.’

He even believes that this battle could be an important reason that brains became what they are today, a theory he is currently testing. ‘I think it might be the continuous struggle, the need to interact with individuals that might have a different agenda, that drove the evolution of complex brains.’

The brain is a material thing, and as such it can be manipulated

The real question to Billeter is: what happens in those tiny fly brains? To answer this question, he searches for the specific neurons – the cells that ‘fire’ to send a signal to your nervous system and communicate with the brain – that trigger certain behaviour. ‘We have adapted fruit flies, so that their neurons react to a light pulse. By targeting specific neurons, we can find out what behaviour it triggers.’

It is, he admits, ‘black magic’. In tests like these, the animals are literally unable to control their own behaviour. They react to the light as puppets on a string. Scary, yes. But beautiful too. ‘The brain is a material thing, and as such it can be manipulated. Understanding how it works makes it an even more amazing organ than thinking of it as a black box that is too mysterious to understand.’

It took Billeter and his students about five months to identify the neurons that controlled the ejection of pheromones and the genes that are connected to it. Now, he is following up on this discovery, because knowing which neurons are involved is not enough. Different individuals have different behaviours. Why? What controls it? ‘In studying this, I hope to discover fundamental rules that apply to behaviours in general. Understanding what underlies individual differences in behaviour is one of the greatest challenges of behavioural biology.’

Of course, he realises that fruit flies are not human beings. Even mice are infinitely more complex. However, it’s their relative simplicity that makes fruit flies such an ideal object for research. ‘Scientists are reductionists’, says Billeter. ‘By understanding the process in details in the fruit fly, this guides us where to look in other animals.’

Add to that the fact that fruit flies are cheap, reproduce fast and easily, and are not subjected to any rules for animal testing, and you have the perfect guinea pig. Still, even though he and his students have to kill thousands of flies in his lab, he doesn’t like the fact that it is necessary. ‘To kill beauty is a sad thing.’

A drug to cure the brain

‘People at the medical faculty can be a bit condescending when it comes to research using fruit flies’, Ody Sibon says. According to her, people should respect fruit flies and the research utilising them more. ‘Quite a few fruit fly scientists have won Nobel Prizes.’

Sibon uses the small insect to study PKAN, a rare metabolic disease. PKAN stands for Pantothenate Kinase-Associated Neurodegeneration. A healthy person can turn the B5 vitamin into the co-enzyme A, an indispensable source of energy. But PKAN patients are unable to do this due to a flaw in their DNA. They suffer from motor dysfunction and often don’t live past ten.

Sibon turns the fruit flies into PKAN patients by tinkering with their DNA. Once they have been given the gene for the illness, they start suffering the same symptoms as human patients. ‘If you have a test tube full of ill fruit flies and you tap it against a table, all the flies fall down. Normally, they would crawl back up again, just like a ladybird on a blade of grass. But ill flies have a much harder time doing that.’

She uses a microscope to operate on the fruit flies. They are sedated, of course, otherwise they won’t stay still. ‘You can use small tweezers and needles to cut their heads open and extract the brain.’ She studies incredibly thin slices of the fruit fly brains under the microscope. ‘We can see that there are holes in the brains.’

Fruit flies are amazing because they lend themselves so well to all kinds of extremely creative research, she says. ‘I could come up with something wild right now and try it out today.’ She recently discovered that a substance no one thought would work did actually have a positive effect on the fruit fly patients. That means it can be used as a possible drug. You can’t just run around injecting people with stuff, and using mice for research takes a lot of paperwork. Fruit fly research isn’t bound by these constraints.

Apart from the flies, human beings also make the research easier, Sibon says. ‘Ask anyone in the fruit fly community about a mutant they made, and they’ll give it to you. Fly people share everything.’

A notion of time

Although fruit flies have infinitesimally small brains, they can’t survive without possessing a notion of time. That is because to attract a female, the male fruit fly flutters its wings. The speed of this fluttering tells females whether they are dealing with the right species male.

Maybe, Hedderik van Rijn thought, he could use fruit flies for his own research. The cognitive neuroscience professor’s research subject is people’s internal clock, which allows us to estimate the passage of time. He reasons that if you can figure out how this works in fruit flies, you might also know what to look for in human beings.

Using fruit flies for psychological research hasn’t really been done before. The first thing Van Rijn needs to prove is that the internal clock even exists. Andrea Soto Padilla, a PhD student with the project, has been trying to do this for two years. She trains the flies in an ‘arena’ measuring ten by three centimetres. The arena contains three tiles, whose temperature can be regulated.

‘The middle one is set to 22 degrees Celsius, which is the perfect temperature for fruit flies. The two outer tiles are set to 24 degrees. They like that temperature much less, and so they sit down on the middle tile.’

Next, Soto Padilla and Van Rijn play a long tone, after which they turn the middle tile’s temperature up to 36 degrees Celsius, which is extremely hot for a fruit fly. The tiles on the left and the right are set to 22 and 36 degrees respectively. They play a short tone when they switch the temperatures of the two outer tiles.

‘After a while, they’ve learnt that they need to move to the left when they hear a long tone and to the right when they hear a short one’, says Van Rijn. ‘With this, we want to prove that fruit flies have a concept of time.’

The research is unique, not just because Van Rijn has come up with a new way to study the notion of time. It’s also the first time that research that is normally carried out using human subjects, is directly tested in fruit flies.

Van Rijn does have to admit that fruit flies are ‘not exactly bright’. ‘They often move to the wrong tile, when the concept is so simple. I just want to tell them to get it together.’